A stylish, sharp, and suspenseful novel for November

The November selection for the Concord Community Book Club is Who is Maud Dixon? by Alexandra Andrews

Alexandra Andrews, author of Who Is Maud Dixon?, was inspired to write a novel by the ever-present angst that stalks the Millennial Generation. Andrews looked around at her friends and felt envious of their success. Andrews, a copywriter, took to the page to find her own self-worth. The success of her debut novel, which has already been optioned for film rights, should to her envy.

Andrew’s devilishly clever novel opens up at a publishing party where Florence Darrow and her young colleagues are debating the identity of bestselling author, Maud Dixon, whose novel Mississippi Foxtrot was one of the best selling novels of the year. Florence believes that Dixon is like her, an outsider. After the party, Florence ends up having an affair with her boss–who is married to a famous actress. When Florence tries to use her dalliance to leverage a book deal, she ends up losing her job.

Florence isn’t worried about getting fired. She believes that the universe is on her side. Two weeks later, she is working as the personal assistant to Maud Dixon herself. What follows is a suspenseful folie à deux that reads as a love letter to The Talented Mr. Ripley. The story leaps from an isolated estate outside Hudson, New York, to Marrakesh, Morocco. Andrews’ novel is a clever example of the “Gone Girl on a Train” school of suspense, but what makes this novel particularly amusing is the author’s impish humor hiding behind every twist and turn.

Pick up your copy of Who is Maud Dixon at Goldberry Books. We can’t wait to hear what you think of this month’s pick! Join us on Facebook to engage in discussion about our newest selection. Follow us on Facebook for the latest news from the Concord Community Book Club. 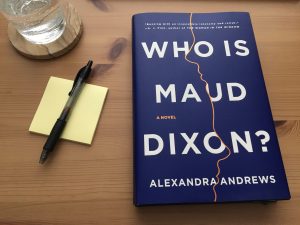 Florence Darrow is a low-level publishing employee who believes that she’s destined to be a famous writer. When she stumbles into a job as the assistant to the brilliant, enigmatic novelist known as Maud Dixon–whose true identity is a secret–it appears that the universe is finally providing Florence’s big chance.

The arrangement seems perfect. Maud Dixon (whose real name, Florence discovers, is Helen Wilcox) can be prickly, but she is full of pointed wisdom–not only on how to write, but also on how to live. Florence quickly falls under Helen’s spell and eagerly accompanies her to Morocco, where Helen’s new novel is set. Amidst the colorful streets of Marrakesh and the wind-swept beaches of the coast, Florence’s life at last feels interesting enough to inspire a novel of her own.

But when Florence wakes up in the hospital after a terrible car accident, with no memory of the previous night–and no sign of Helen–she’s tempted to take a shortcut. Instead of hiding in Helen’s shadow, why not upgrade into Helen’s life? Not to mention her bestselling pseudonym…

Taut, twisty, and viciously entertaining, Who is Maud Dixon is a stylish psychological thriller about how far into the darkness you’re willing to go to claim the life you always wanted.